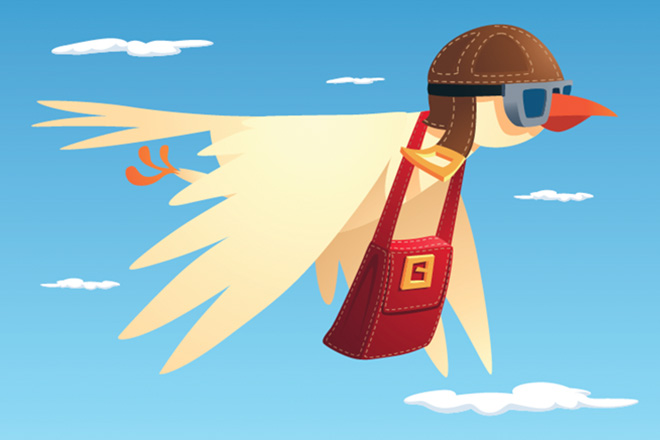 Twitter is nothing new. Cyrus the Great of Persia was sending tweets back in the 6th century B.C. He used carrier pigeons to send messages to his generals in the field. Granted, he was using real birds instead of tapping a cartoon-bird icon on a smartphone, and he was limited by weight instead of characters. Still, the basic goal was the same — to connect with other people across long distances.

King Cyrus wasn’t alone. If necessity is the mother of invention, the need to connect is at least worthy of a paternity test. From smoke and drum signals to the printing press and telegraph, the desire to communicate across great distances has driven innovation since people first realized too much screaming will give you laryngitis. What’s surprising to modern sensibilities is how long it took marketers to capitalize on these innovations.

“Mr. Watson, come here. I want to see you,” were the first words to be uttered across a telephone line. But it’s easy to imagine that if the telephone had been invented in a post-Nike world, those words would have been, “Mr. Watson, just do it.” The telephone was a huge technological advancement when it was invented in the 1870s. Amazingly, it wasn’t until the 1950s that DialAmerica Marketing, Inc. started interrupting meatloaf night with the advent of telemarketing.

The marketing potential of inventions like TV and radio were realized much faster, while each was still in its infancy. That’s partly because advertising dollars were needed to sponsor content, but also because marketers had figured out that with each new technology came new opportunities to sell.

These days, marketers are ready. The moment a new technology emerges, somebody somewhere is brainstorming how it can be used to connect with consumers and separate them from their money. However, this rapid adoption of new technology isn’t so much about getting a competitive advantage as it is about simply staying in the game. Keeping ahead of the technology curve is getting harder and harder, and it’s only going to get worse.

Technology advances exponentially. That means as technology advances, the rate at which it advances increases, too. It’s a multiplication effect. In other words (or numbers), instead of growing like this: 2, 4, 6, 8, 10, technology grows more like this: 2, 4, 16, 256, 65,536. The actual rate of growth is a little more complicated, but that’s the basic CliffsNotes version of the idea. (Google Moore’s Law if you want to dig into the nerdy details.)

This exponential growth means devices that are pure science fiction one minute, quickly become reality the next, and are out of date junk soon after that. Anyone born before 1980 can remember when the idea of a car phone was a futuristic fantasy. Now a car phone is the stuff of comical nostalgia, like single-shot muskets or dial-up modems.

The plus side of supersonic technological advancement is that there are more opportunities to connect with consumers today than ever before, and tomorrow there will be even more. The downside is that if you don’t stay on the cutting edge (or have a partner that does) you’re not just perceived as dull — you’re literally out of touch.

Measuring the Value of a Connection

Reaching the Person Behind the Desk